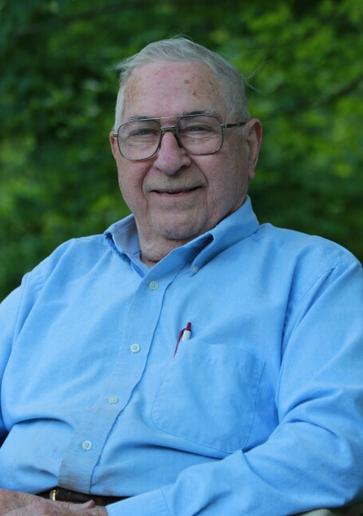 Deployments:  Europe He served in the U.S. Army during WWII in the European African Middle Eastern Theater from December 11, 1942 until November 18, 1945.

Units:    Elmo was a member of the 101st Airborne and the 321st Glider Field Artillery Battalion, Company B.  He was involved in battles and campaigns at Normandy where he landed on Utah Beach during D-Day, Ardennes, Rhineland, and Central Europe at the Battle of Bastogne and Holland.  Elmo was awarded the EAME Theater Ribbon with four bronze stars, a Bronze Star, Distinguished Unit Badge, and the WWII Victory Medal.

Other Information:  He married Louise Cannady in January of 1958 and together raised their three children.  In 1977, the family moved from the Chicago area to Dana Lake.  Elmo retired from Inland Steel in 1980 as Chief Engineer.  His career on the Great Lakes iron ore ships were spent on the E.J. Block and Joseph L. Block.  Early in his retirement, Elmo served as Chief Engineer for the U.S. Naval Sealift Command on the T-AGOS and sailed around the world.  When he retired for real, he and Louise enjoyed their time and home in the Hiawatha Forest.  Elmo served as Fire Chief for many years on the Tri-County Fire Department.  He enjoyed gardening, raising chickens, and inventing projects at home.