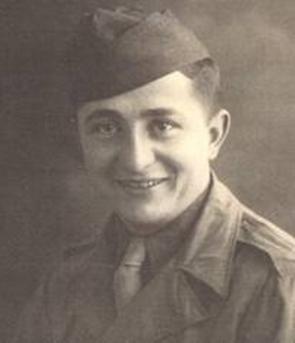 ​On March 17th 1944, Leonard was finally shipped overseas with the 542nd PIB to England in preparation for the D-Day Normandy landings. While waiting to be assigned to a unit, on May 15th 1944 Leonard was sent on a British Commando training course and then was assigned to the 506th Parachute Infantry Regiment at Littlecote, England.  Leonard arrived at the 506th Headquarters to late to participate in the Normandy Invasion and was instead dispatched to make sand tables and other invasion materials until September 1944, when he was once again reunited with his unit to make the Market Garden Operation. By this time, Leonard was jumping into The Netherlands with total strangers and had few friends in the unit as he prepared for battle. As a machine gunner, he found himself always out front and the first target when combat ensued. It was a precarious position but while his guardian angel watched over him, many of his comrades suffered wounds or were killed. Leonard was once again in combat with the 506th in the Battle of the Bulge where in cold and bleak conditions he manned his machine gun. On January 10th 1945 while defending the woods just outside of Bastogne, Leonard was wounded when an artillery barrage hit his machinegun nest, severely wounding him and badly breaking his left femur, which he feared would result in amputation. This resulted in his evacuation to the rear and transfer home to America via England and two and a half years of medical treatment at Vaughan General Hospital; Percy Jones Hospital, Battle Creek; Fitzsimmonds Hospital, Denver before his final discharge to civilian life.

Once discharged Leonard returned to his native Detroit going to Art School and then working for the American Automotive Industry. Sadly, Leonard passed away on December 4th 2010.

Other Information:        Leonard just graduated from High School when he went to enlist in the army and began his military training at Fort Custer followed by three months training at Camp Robertson, Arkansas before joining the 75th Infantry Division at Fort Meade, Maryland. While at Fort Meade, Leonard volunteered for airborne training and was shipped to Fort Benning to go through jump school. Upon graduating with his class, Leonard was taken ill and while the rest of his graduating class was shipped to the Pacific, Leonard remained behind in hospital to recover. Once back in good health, Leonard had to wait for his paperwork to catch up and in typical military fashion was waiting for his orders and during this period went through demolitions school, before being sent to Camp Mackall, North Carolina to join the 542nd Parachute Infantry Battalion