Other Information:        Walter Riner died Tuesday, July 20, at Providence Medical Center.  He was born in the Omaha, Nebraska on January 17, 1928 son of Walter and Elizabeth Riner. He joined the army prior to WW II.  He served in the Infantry in North Africa, Sicily, and southern France. Because of his German linguistic skills, he was assigned to the war crimes trials in Nuremberg. He later served with security during the Berlin airlift.  His father, two brothers served during the war both brothers were KIAs – one on Bataan and the other at Anzio, Italy. In 1950, he was assigned to KMAG in Korea.  When war broke out the unit he was training with ceased to exist.  They joined up with 2 INF Div until February 1, 1951 when captured and taken prisoner. He was held as a POW until July 1953. After recuperation, he returned to Europe in 1955 to help bring SETAF to Verona, Italy. In 1960, he was assigned as one of 32 personnel to Republic of Vietnam.  He completed two more tours for a total of more than four years - all infantry and heavy weapons duties.  He returned to the United States in July 1969 to Fort Leavenworth. He retired as a First Sergeant on July 1976. He received numerous awards and decorations throughout his service. He held a job in security at the Lansing Correctional from 1976 until retiring in 1993.

He is married former Patricia Burkett. She survives at the home. He is survived by his daughter, Patricia, Copperas Cove, TX, her four sons; stepsons Stephen Burkett and friend Deanna, Austin, TX and Jeffrey Burkett, his wife Candy and granddaughter Katrina, Alexandria, VA. He was active with the American Legion especially Legion Baseball. He is also a member of the VFW Post 12003, DAV Ch 7, Vietnam Veterans of America Ch 75 and the Lansing Lions Club. He was proud of his interview with Walter Cronkite in the TV documentary “Proud to Serve”. He was well known for wearing his WW II, Korea and Vietnam cap. 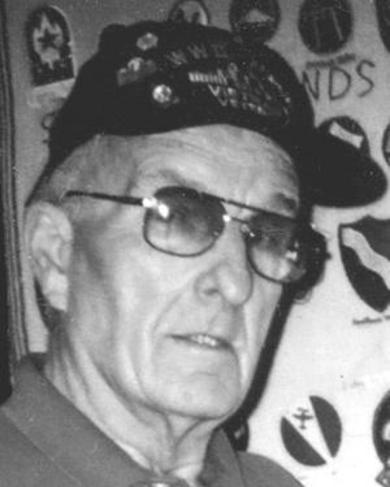