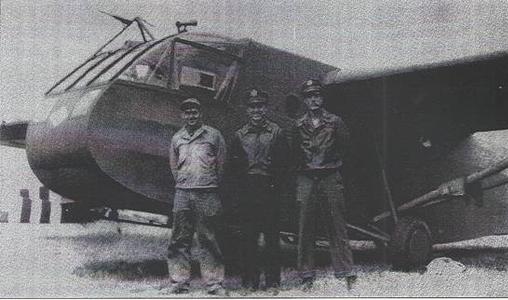 Other Information:        Dan graduated from Classen High School in May 1936 and then attended The Central State Teachers’ College in Edmund, Oklahoma. During this time Dan began flying lessons at Burke Aviations Services, Wiley Post Airport, Oklahoma City and received his certificate in August 1941. In late September he enlisted in the Army and served with the field artillery at Fort Sill where he rose to the rank of Sergeant, before transferring to the Army Air Corps to train as a Glider Pilot. He trained at Randolf Field, Texas graduating in May 1943 and was commissioned as a Flight Officer. He joined the 301st Troop Carrier Squadron at Baer Field, Fort Wayne, Indiana on February 29th 1943 prior to its deployment to the European Theater and piloted glider 42-74015 to Normandy on D-Day June 6th 1944 with James W Pierce as his co-pilot. For this mission he received the Air Medal. Dan Meshew was killed on July 27th 1944 while travelling in a C-47 aircraft on an evacuation flight between England and Scotland. It is unclear why Dan was on the fatal evacuation flight on July 27th, but like all the passengers and crew, he was killed and he is buried at the Cambridge American Cemetery in Plot E, Row 4, Grave 83.